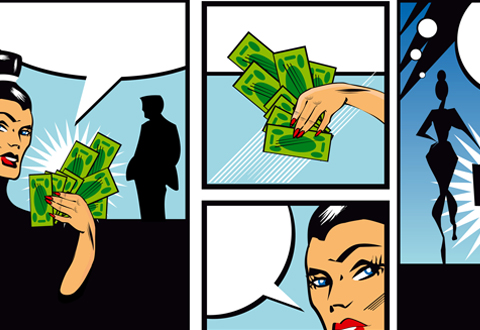 With the rise of the Superhero film, more and more movies are being adapted from comic books than ever before. After decades of being regarded as children’s entertainments and not really worthy of Class ‘A’ film treatment, the comic book is now practically a genre

recognized as both a complex art form in and of itself and almost perfectly suited to the film medium. Each year sees the release of a slew?? of new films based on comic books to some extent, and the Top Ten lists of films each year are increasingly dominated by the likes of Iron Man, Superman, and Batman, while television has seized on graphic novels such as The Walking Dead for inspiration.

The majority of, these films treat comics the same way they treat novels-As source materials. They generally eschew any aspect of the comic that doesn’t seem ideal for transition to the screen, and don’t regard the framing, composition of the comic books as any sort of guide to the framing and composition of the filmed scenes. Most, in fact, have their own bespoke storyboarding, a significant art form for film creation. Although this may change in the near future, as some films have in fact embraced the concept of the comic book source material being the film’s storyboard.

In Robert Rodriguez’s 2005 adaption of Frank Miller’s Sin City, the final movie not only resembles the source material in its color scheme and style, a very stark black and white with punctuations of color, resulting in a surreal reality that often appears divorced from anything solid – but actually is based, shot for shot, on the frames in the comics themselves. In fact, many sequences in the film are exact replicas of the panels from the original film, down to the background details, the angle of the ‘camera,’ and its implied movement from one frame to another.

In fact, it is because of this extensive use of comics as storyboards, that Frank Miller is credited as co-director on the film with Rodriguez. This is only just as he apparently determined the camera angles, blocking, and other aspects of the film’s direction years before the rights were even sold.

Sin City still, remains as one of the only films to use the comic original as a storyboard, and resistance to the idea remains strong in Hollywood, for two basic reasons:

Sin City 2 is due for release in 2014, marking another sequel that will use the original comic panels as storyboards – and more will certainly follow.