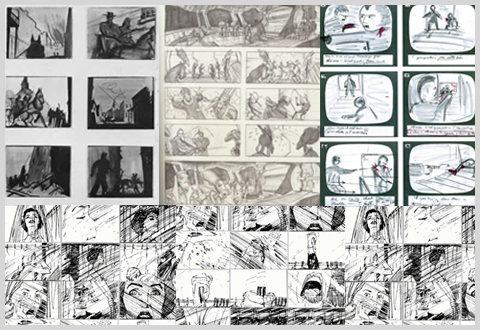 Storyboarding as an Art Form

In the film ‘Argo,’ which depicts the thrilling rescue of American diplomatic workers trapped in Iran during the Hostage Crisis, a fake movie titled Argo is created to give a plausible excuse for the Americans to pretend to be Canadian film-makers. When making their last-minute escape at the airport, the Iranian guards, convinced of the film’s legitimacy, admire the beautiful storyboards the CIA had commissioned for the fake film, and the hero, played by Ben Affleck, gives the storyboards to them as a gift as the Americans rush  to the plane.

The humble storyboard is often treated as a blueprint – something workmanlike and rough – and indeed some film-makers create storyboards that are nothing more than rough sketches that almost no one else can even interpret. But storyboards are also frequently art unto themselves – beautifully composed and inked paintings that could easily be framed and hung in a gallery.

Storyboards tell a story using visuals. There are often stage directions or other text included, but the main purpose and power of the Storyboard is to take the story being visualized and turn it into a powerful visual story. One of the most amazing aspects of the Storyboard is that it is so frequently an ‘alternate take’ on the resulting film: When the storyboard artist is separate from the film-maker, they often have a distinct visual style that may differ from the final cut of the film, and often scenes and sequences that don’t make the final cut of the film (or may not have even been shot) are beautifully depicted in the storyboards – and nowhere else. That’s one reason why storyboard scenes are frequently included as DVD extras for films.

The qualities of some storyboards go far beyond simple blueprints or sketches. They are often composed with incredible skill. Some of the most famous storyboards that stand out as distinct pieces of art are:

These examples show the possibilities – and the fact that they have been preserved for history shows their value as distinct pieces of art. When approaching your next video project, don’t consider the storyboarding to be an afterthought. Treat the work with the attention true art deserves.