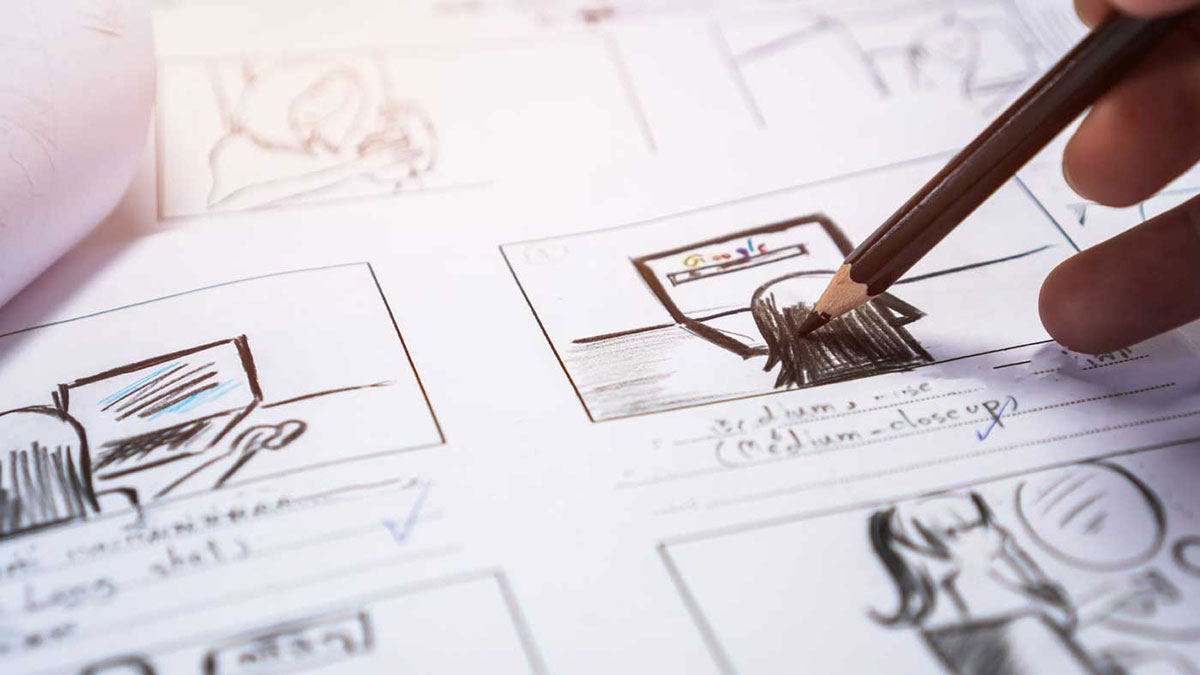 How to Make a Great Storyboard

Creating storyboards is a vital part of the filmmaking process. Storyboards are detailed plans of videos that can be used for both animation and live-action sequences. These plans contain pictures, descriptions, extracts from the script, and any additional information that makes a good storyboard essential may be helpful in the process of creating the film. Laid out in a similar way to comic strips, storyboards are a visual portrayal of the director’s vision. Doubling as a project management tool, tasks, responsibilities, and requirements can branch from storyboards to keep the entire film project team on track.

Storyboards like these are often used in software development, website creation, and many other types of projects, especially when large numbers of people work on the same project. Planning is vital to every type of video or film you create for your business, from explainers, sales videos, explainers, and more.

Storyboards are vital to professional video creation, allowing for optimal organization and flow. Planning videos keep you and your team on the same track with a clear indication of the direction and feeling the video needs to have. There is always the temptation to “wing it” and create as you go, but this almost always wastes time, resources, and results in multiple iterations.

Who or Which Industry Requires a Storyboard the Most?

Storyboards are useful across all industries and video or film types. It’s a technique that saves time and money by reducing trial-and-error, misunderstandings, hard-to-explain elements, and helps to track the progress of the project. Some of the traditional industries that make use of storyboards include:

The movie industry is the first to come to mind when discussing storyboards. We’ve all seen them in popular movies and cartoons. In real life, these are usually in the form of sketchbooks with detailed notes. Storyboard artists are specialists in creating the visuals and effects of the film, allowing for meticulous planning and identifying potential issues as they arise.

Storyboards are incredibly important in the theater, giving directors, actors, set designers, sound and lighting engineers, and other vital team members to identify their roles and responsibilities. Keeping everyone involved focused on the same goal from the beginning boosts the overall quality of the production.

In the animation industry, storyboards are used as a first step, from which animatics are constructed. Animatics are basic motion animations built from storyboards to better convey the look and feel of the result.

Advertisers also use these to make their creative process more fluid. The prevalence of 3D images, animations, and live-action in combination make storyboarding a vital step, keeping all the elements required in line with each other.

Photomatics are still-images that are used in sequence in a similar way to animatics. Advertisers are using these more and more as a way to cheaply visualize an entire video before beginning production. Photomatics are crucial to the planning of advertising campaigns, allowing for cohesivity planning across all channels.

Comic book scripting can be incredibly challenging, and storyboarding makes all the difference. Storyboarding comic books allows for the look & feel adjustments, storyline adjustments, and more fine-tuning and pre-production changes. Combining the scripted elements with visual cues for the first time happens in the storyboarding phase.

Businesses are beginning to use storyboards to a greater extent in planning advertising campaigns, events, proposals, presentations, and commercials. This hugely adaptable technique is even used by accountants to visualize flowcharts, stages of progress, and the interactions between accounts.

Educators have found that storyboards are hugely beneficial to learning. Many children are visual learners and have been traditionally unable to fully grasp concepts due to a lack of visual aids. Storyboarding combines visuals with specific highlights of lessons to communicate the material in a way that helps students remember more.

Storyboarding is growing in popularity in various industries centered around interactive media, including software and web development, instructional media design, event support, and infocenter planning.
Storyboards are not only industry-specific – they’re also usable by different professionals in their everyday lives. There is a growing number of professionals from all walks of life with a newfound respect for storyboarding. Here’s how storyboarding is used by different people:

What Purpose, the Industry Requires Storyboard

Storyboards are all about planning and being prepared for the next steps. It’s a vital pre-production step that is so effective; it’s being used in almost every industry to some extent. They’re useful for recording ideas and thought processes, future recreations, and better communication across the board. Storyboards add a fantastic layer of flexibility to the planning process, allowing for multiple timelines, rapid changes, and early identification of potential issues.

What It Takes to Make a Storyboard

Here how to make a storyboard is a crucial question. There are many different types of storyboard, and it’s a mistake to think they all need to be a piece of art. The fact is that they are simply representations of your own or someone else’s imagination.

Storyboards Are Easy to Make

There are a large number of different types of a storyboard that have been developed over the years for various industries. Here are the three main formats:

Dos and Don’ts While Making Storyboards

Storyboarding is an incredibly vital aspect of pre-production planning, giving your creative team the best shot of getting a clear vision of the end product as possible. There are several software tools available to enhance this stage of the planning process:

Making use of storyboard artists with years of experience gives you the best chance of saving money, time, and reduces the likelihood of forgetting crucial details to almost zero. Seasoned professionals have a deep understanding of the storyboarding process and how it informs the rest of the creative process.